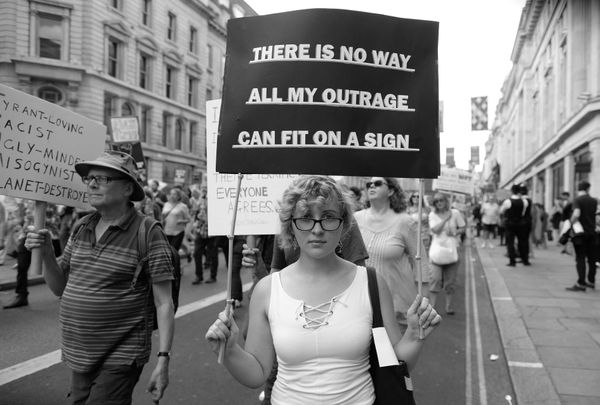 The best teacher I ever had was an ostentatious man. He taught tenth grade history and geography at my high school. He would regularly show up in full costume for presentations about the Roman Empire, the World Wars, and other major events in our planet's history. He was vivacious, funny, a man who knew his subject and loved to teach it. I can vividly recall his "death tests" about geography and countries, and how my classmates and I spent an inordinate of time studying for them. He was tough, yes, but he was fun.

His name is Morton Berger, and he will die in prison.

He was arrested the summer after my tenth-grade year, on charges which I will not describe here (you can read the details on his Wikipedia page if you so desire). He was tried, convicted, and sentenced to two hundred years in prison with no possibility of parole, pardon, probation, or clemency, per Arizona state law.

What he did was reprehensible. It was immoral. Outrageous, even. He deserves to be in prison. I will not defend his actions. I will not debate the morality of his deeds. What he did cannot be made right.

In the eyes of many, he is an evil man. In their outrage, the people who judged his crimes and decided he was unfit for society damned him, and quite frankly I understand why. But their condemnation left me with a question: how could an evil man teach that tenth-grade history class, my favorite class I've ever taken. If he was so evil, how could he be that good?

I was thinking of Mr. Berger and his class as I watch the online "debates" about the Covington Catholic schoolboys and their behavior. The outrage stemming from an encounter between them, Native American elder Nathan Phillips, and members of the Black Hebrew Isrealites, has been swift, forceful, loud, and omnipresent. These boys mocked and derided an elderly Vietnam veteran who was there participating in the first-ever Indigenous People's March.

Note to readers: most of this story was written last week, before certain extended videos started appearing.  I am leaving it intact, as I believe the point stands, though the circumstances surrounding this particular event have changed and we now have more information with which to decide.  You be the judge.

I've seen the video of the event. To my eyes, it certainly appears that the students a) knew what they were doing and b) were doing so intentionally. But the resulting media coverage has been... bombastic.

Reports stating that the boys chanted "build the wall" are contradicted by most recordings. The Washington Post admits the situation is "more complicated than it first seemed." National Public Radio (NPR) describes the two sides of the story as having "differing narratives". No one is sure who caused what or who started what, and all sides are rushing to blame the other. The viral image used in NPR's article (that of a Covington student smirking at Mr. Phillips) appears to be driving much of the vitriol toward them.

In the eyes of many, particularly the circles I frequent as a liberal-leaning person, they are evil boys, that's an evil school, and that's all there is to it. Their anger is, they feel, justified. How could good boys do a thing like this? It's outrageous!

I found this image at Wikimedia during research for this post, and I think it's rather apt:

"There is no way all my outrage can fit on a sign" is what the protestor's sign reads. I agree: the depth of emotion the state of outrage implies is too complex to fit on any sign. Yet we keep trying to do exactly that: boil complex emotions such as outrage down to sentences, angry blog posts, or tweets that will express how we feel about injustices such as the Covington situation.

We distill the world, and all its intricacies and nuance, to soundbites. To our continued detriment, and to the hindrance of our society.

I am now forced to separate the fact that Mr. Berger was an inspiring teacher from the heinous crimes he committed. He was both an incredible educator who would parade around campus as a Renaissance painter and a person who made repeated, sustained, despicable choices. I knew him, inasmuch as a student can know a teacher. He should be in prison, that is certain. But for two hundred years, when murderers get thirty? Is that justice? Or is it, dare I say, outrageous?

It is difficult to separate a person's acts from who they are. They may be the same thing, but more importantly, they may not be. We need time to determine which it is. Outrage culture steals that time.

The Covington students, while their actions may have been ill-advised, misguided, or even straight-up racist or misogynist, are due some measure of patience from the rest of us. If they were racist, or misogynist, they should be condemned as such; they should learn actions have consequences.

Those of us who are reacting to the coverage of this event, calling it outrageous and drawing hasty conclusions from it, should recognize that unless we were there, our knowledge is incomplete, our information filtered through various lenses and groups, each with their own (known or unknown, visible or invisible, benevolent or malicious) agenda. We need to be just a little bit patient.

We do not have the full story. We might not ever have it. Without it, we are in no position to judge.

The world needs a little more patience, and a little less outrage.  Be patient, and the answers will come. Be vigilant. Think critically. Ask "why?" Wait a few minutes before sending that angry tweet. Write that nasty email, read it again, and delete it. React only to things that truly move you. End outrage culture! Society improves when we stop being outrageous and start being patient.

Thank you for coming to my TED talk. :)

NOTE: Political attacks, racial statements, or anything perceived to be disrespectful to any group or individual are not permitted in the comments on this post.  If found, they will be deleted, and the user will be banned without notice. Any comment which directly identifies Mr. Berger's crimes will also be deleted; I do not want that audience appearing here.  YOU HAVE BEEN WARNED. Comments which are respectful, thoughtful, and even-handed are welcome and encouraged.

The Bittersweet End of the Read-Aloud Corner

The Ultimate Guide to Async and Await in C# and ASP.NET